CLICK ON ONE OF THE ABOVE BUTTONS TO GO TO THERE......ONLY "N SCALE MODELS" HAS A PULL DOWN MENU AS WELL.

Model with shells removed showing connections and location of motor, decoder, speaker and connectors in tender 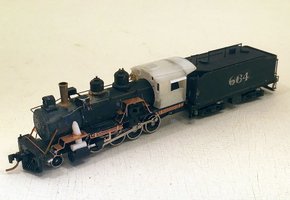 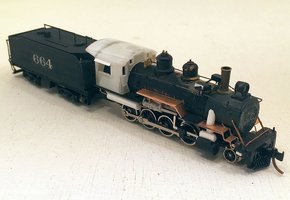 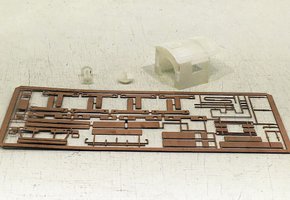 YouTube MOVIE of engine 664 on my layout (please klick) 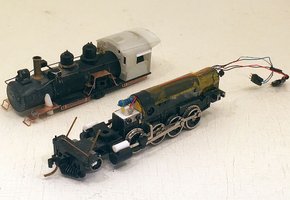 Position of front LED and resistor. 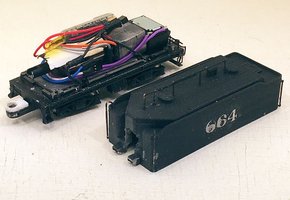 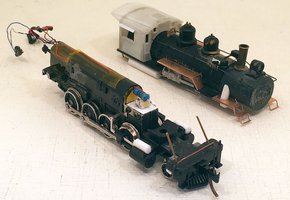 Position of front LED and resistor.

Postion of decoder and speaker. 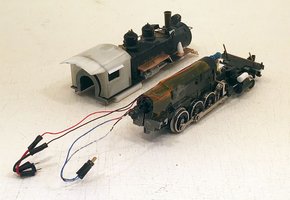 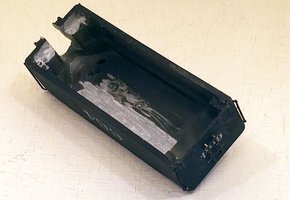 Location and form of the slot in the tender front to accommodate the drive shaft. Some extra removed material on inside of shell.

Consolidation  664 was constructed in 1900, probably using an old 4-4-0 as starting point (according to E.D. Worley's IRON HORSES book.

It was upgraded several times during its long life and was donated to Travel Town, Griffith Prak, Los Angeles, were it stil is on display.

This conversion tries to copy this last version. Drawings of the tender are from Frank Ellington's book STEAM LOCOMOTIVES OF THE SANTA FE.

I have a special interest in this engine because I model Oklahoma in the 1950-1960 era. This engine class was used a lot overthere and small, good running models in N scale are scarce......

The base of this version is the MDC or Athearn old 2-8-0 engine. That model is a goodstarting point because of the the very good running charistics and excellent pulling power: slow speed is perfect and my model pulls 25 cars even up a 0,5% incline.

The original model looks toylike and needs a number of changes to resemble the intended 664 prototype.

The rivet counter will certainly find flaws but from a little distance this engine is quite a credible replica of the Travel Town engine; compare with the pictures you can find on the internet.

The original tender cannot be used: wrong trucks and truckspacing, motor too big and not ideal.....unfortunately.

The new tender is completely 3D printed (and not resin cast) because the walls are thinner than the cast version. For the sound version you will need all the room you can get inside the tender shell. The correct archbar eleptical feature all-wheel electrical pickup.

Shorten the vertical wheelcontact strip to floorlevel of the tenderframe and solder short black (right rail) and red 9left rail) leads to them. Using the supplied shrink tubing insulate these connections.

Inside the shell is enough room for the new coreless 8 x 16 mm 12V motor, a ZIMO MX648 sound decoder and a 8x11 mm sugarcube speaker plus all necessary wire connections. I took the ZIMO MX648 because it was the smallest sounddecoder available at that moment and the fact that it does not need an external capicitor. Programming is a bit more complex but the different sounds available in the standard steam version are excellent.

There is even enough room for a 1 mm thick lead wheight under the decoder and between motor and speakerbaffle (see pictures). The tender is quite light and the lead provides better tracking and railcontact.

The original drawbar is shortened and fixed with a screw into the tender floor (see picture).

The decoder is placed/glued on its side besides the motor and you might have to scrape a little bit off the shell roof to create enough clearance (white spot inside tender shell see picture).

As said: make a 1 mm thick slab of lead covering the tenderfloor - leaving the holes for the wheelcontactstrips out and NOT under the decoder and speakerbaffle - not only for extra wheight but also to raise the motor shaft level with the drive shaft inside the engine. Carefully align the motorshaft (horizontal and vertical) with the shaft coupling inside the engine. Simply glue the motor in place. From a short piece of Evergreen styrene tubing fabricate a new coupling on the motor shaft to accept the driveshaft between engine and tender. Take good care this shaft can move about freely (no binding nor falling out).

Using a motor tool and files you will have to cut a slot in the tender front to accommodate the drive shaft. Not prototypical of course but once engine and tender are close coupled hardly noticeable (see picture).

The original engine needs some changes......

The headlight needs to be filed round as per prototype almost to the clear light tubing. Painting the filed housing black again will prevent stray light from coming out.

The original stack has to be removed (wrong shape) and replaced with the supplied 3D printed new stack. Simply grab old stack with small tweezers and pull out of the boiler. Glue new stack in place.

Also remove the sanddome; its in the wrong place. Grab the sanddome with tweezers using some protection to prevent scratching and pull out of the boiler (not difficult). Using the supplied 3D printed disk cover/close the whole restoring the round boiler shape. Be careful to clean the underside of the disk: you have only one chance to seat it correctly. Grind off the tab on the underside of the removed sanddome being careful not to damage the dome itself. Glue on the boiler a little backwards (use pictures of original to determine).

Install the numberboards between stack and sanddome. Keep the bands between the boards flat/straight, bend the ends down and add a 90 degree band about 1,5 mm down. Clip the ends just after this bend. Using tweezers carefully wrap these "hooks" around the boiler handrails and apply a little ACC when you are satisfied with the location (level and square).

Drill a small hole and apply a bell between steamdome and cab (not supplied, Detail Associates or Miniatures by Eric).

The cab is next: simply remove the original one and apply the new 3D printed one. Using a grinding disk I removed the last mm of the end of the metal frames, shortening the engine.

Now the running boards. In the supplied phosphor bronze etching are several additions: the extensions with ladders over the cylinders, the "stairs" on the left side over the air pump and the bridge over the power reverse on the right side.Both power reverse and airpump are not incuded; Detail Associates or Miniatures by Eric or your own scrap box.

Fold the stairs on the front extensions checking the above pictures. The running board itself consists of two layers and has to be shortened a bit. A short narrow strap is glued under the existing runningboard extending forward a little and the new extension is glued on top with a snug fit against the existing board.

Using a grinding disk/motor tool remove parts of the existing runningboard ar the location of the air pumps (left side) and power reverse (right side).

Check prototype pictures and the model pictures above.

The runningboard above the power reverse has two layers and the lip alongside must be folded downwards to facilitate glueing to the boiler.

Drill 2 holes in the deck of the front to accept the rods connecting to the boiler. I used 0,5mm brass rod. Glue in place with ACC.

There are 4 wires running from engine to tender: right rail (red), left rail (black), front LED (white and blue). Use the thinnest, most flexible wire you can get. Glue a short piece of the plastic cover of the first two to their respective frame halves with ACC and using current conducting (silver) paint glue a short piece of bare copper threads to the frame.

The LED is glued on a small piece of styrene  together with the 470k resistor onto the frame in the cavity were the old light was.

If you route the wires to the tender as I did (see pictures) you will have to glue a thin styrene strip on top of the motor and driveshaft just as wide as the slot in the tender front and extending just 1 mm out of that front. That way you will prevent the wires from being snagged by the driveshaft.

Using some small styrene rod (just a little shorter than the main piston valve) recreate the upper piston valve and glue in the groove just filed.

Last efforts..... using the same styrene rod and some 0,5 mm brass rod create the airreservoir and airpipes under the right side of the cab.

Under the left side of the cab and left running board are the "cooling pipes" from the fret (bend tabs 90 degrees en glue to underside running board).

If you wish you can change the front truck wheelset to a prototypical disk wheel of your choice. Depending on the new axle diameter you might have to enlarge the slot surrounding the axle.

Clean the shells in warm soapy water, prime, paint and decal. You might want to paint the tire rims of the main drivers and the side rods....